Senior managers of Italian marine insurance broker Cambiaso Risso Group are getting ready to pass the baton to the next generation.

But before they do, 63-year-old managing director Mauro Iguera and chairman Marco Risso, 71, want to diversify the Genoa-headquartered company into new areas and geographies.

Iguera and Risso both have family members who are being groomed for senior roles in the company, which is best known for its involvement in the hull and machinery sector.

One heir apparent is Risso’s son Andrea, a long-time stalwart of the company who, now in his 40s, is being prepared to take the reins. 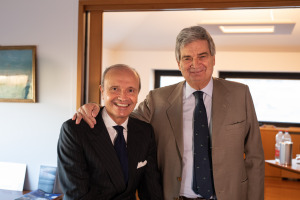 The younger Risso remains responsible for commercial activities but is spending more time with Iguera to develop his management skills to enable him to take over in “due time”.

Article continues below the advert

Other potential successors include Iguera’s eldest son Nicolo. He is a naval engineer who has taken a role in the newly formed special risks division, headed by lawyer Alberto Comitardi.

The managers said the new division is designed to cater to the needs of shipowners and charterers in an era of digital piracy.

“That’s one of the special sectors we want to push,” said Iguera.

“We need the new generation to step in and to have the wish to develop the business,” Risso added.

The sons do not report to their fathers in their corporate roles. “This makes it less of a family arrangement and more professional,” Risso said.

Talk over the future direction of the company was inevitable following the sale of a majority stake of Cambiaso Risso to French insurance broker Siaci Saint Honore in early 2019.

Iguera and Risso agreed to retain their respective positions for a number of years, including following the recent merger of Siaci with competitor and compatriot Diot in November 2021.

And Risso believes that the relationship with the French companies, led by Pierre Donnersberg and Christian Burrus, works well.

He credits the French with taking “a family approach” and “dedicating personal attention to the people working in the company”.

“That has been our philosophy since we were born,” he said.

The partnership with the French company has also provided an incentive to diversify both globally and in new service areas, most recently into dry cargo and yachts.

The expansion into the dry cargo sector led to the appointment of veteran shipbroker Francesco Torelli to establish a chartering desk.

He will re-establish the business that the company ceased in the mid-80s following an amicable separation with the Cambiaso family.

Another more recent addition is the insurance in the luxury yacht sector, headed by Raffaele Bruzzo.

The service was offered to private boats of shipowning clients in the past, but has grown into a business in its own right, said Iguera.

The establishment of new business units is expected to provide an incentive for the new generation to develop the business. But there is a recognition that nurturing family talent has limits.

“We have good people in the company who are in their thirties and forties that can be managers of tomorrow of some sectors of the company,” said Iguera. “So we try to create possibility for them to see Cambiaso Risso as a working place for life.”

Diversification is attractive because it spreads the risk in a volatile business, said Risso.

The company has offices around the world employing more than 300 people. It is well established in France following its tie up with Paris-based brokers.

It is considering its options in other areas and geographies, including opening an office in Hamburg, Germany.

“In spite of the global health emergency, our entire insurance sector has seen a major growth in 2020 and 2021,” Iguera said.(Copyright)