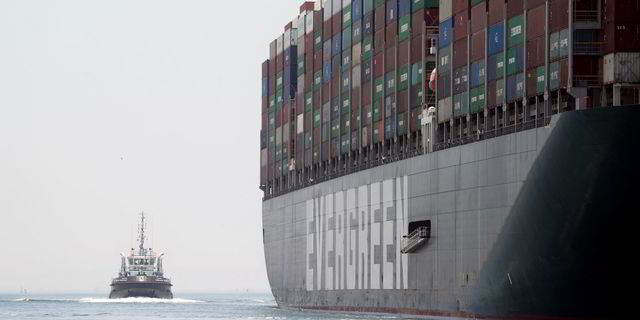 The containership Ever Given resumed sailing more than 100 days after it caught the attention of the world by grounding and blocking the Suez Canal.

Its release from arrest was timed to coincide with a ceremony to mark the conclusion of a compensation deal between Japanese shipowner Shoei Kisen Kaisha, its insurers and the Suez Canal Authority (SCA).

The ceremony for the release of the 20,388-teu Ever Given (built 2018) was hosted by SCA chairman Osama Rabie and, via video link, Shoei Kisen president Yukito Higaki.

Ship tracking data shows the vessel is heading north past Ismailia, where the ceremony was held. It is due to arrive in Port Said for inspection later on Wednesday.

“We would like to take a moment to specially acknowledge the Ever Given’s master, officers and crew who played a vital role in the safe refloating of the vessel and in her maintenance over the last months,” Shoei Kisen said.

“We would further like to acknowledge the families of the crew who have faced the uncertainty of not knowing when their loved ones would return.”

Following its release, International Chamber of Shipping secretary general Guy Platten said his association was involved in helping to secure the ship’s release.

“I am proud of the way that ICS has been able to work quietly behind the scenes to bring the parties together and reach a mutually agreeable settlement,” Platten said.

Faz Peermohamed, director of law firm Stann, represented the ship’s owner and its insurers in the compensation talks.

“The Suez Canal succeeds and will continue to succeed because of the special partnership between the Suez Canal Authority and the vessels using the canal,” he told the SCA ceremony.

He explained that the settlement of compensation had helped maintain the relationship.

“I am pleased to say that over the past weeks and months, through common sense, good will, and hard work, we have achieved this,” he said.

However, despite the platitudes that followed the settlement there are many in the insurance world that are unhappy with the outcome.

The SCA’s decision to hold the vessel, cargo and seafarers in support of an initial $916m claim, which was in excess of the ship and cargo valuation, has been criticised.

It has also been claimed that by using a local Egyptian court insurers’ rights to a fair hearing have been limited.