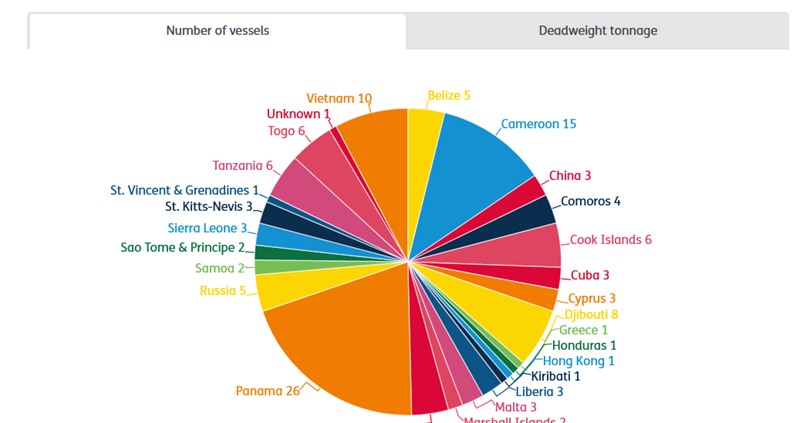 Countries such as Togo, Tanzania, Djibouti and Cameroon are rarely shipowners’ first choice to flag tankers. But for the subterfuge tanker fleet that’s keeping sanctioned Venezuelan and Iranian crude flowing, these little-known registries in the world’s poorest countries allow them to hide in plain sight

A Lloyd’s List and Lloyd’s List Intelligence special investigation details how, why, and which registries are flagging the Iranian and Venezuelan-linked fleet of some 150 tankers that exploit regulatory loopholes to ship millions of barrels of crude through the world’s busiest waterways. This is part two of a series using data compiled from Lloyd’s List Intelligence to shine a light on one of the darkest and most opaque sub-sectors of energy commodities shipping. 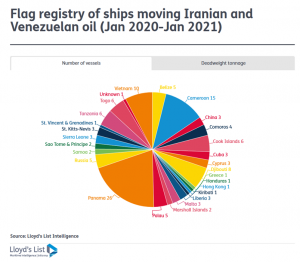 REGISTRIES representing 12 African, Pacific and Caribbean countries flag 75% of tonnage identified by Lloyd’s List as evading US sanctions and shipping cargoes of Iranian or Venezuelan crude.

The subterfuge fleet has evolved and enlarged over the last 18 months as Iranian and Venezuelan interests seek to circumvent US sanctions on their oil and shipping sectors.

The insurance and classification status of as many as 130 tankers is unclear, raising significant safety and environmental risks given all tankers are operating in busy chokepoints of the Middle East Gulf and Singapore Strait, or in Venezuela and the Caribbean.

Most tankers are aged over 20 years and purchased over the last two years by anonymous owners who then begin a practice known as flag-hopping, one of many deceptive practices used to obfuscate regulatory scrutiny.

Flag-hopping — the repeated changing of registries, often alongside the formation of different companies and new names — is the most obvious tactic.

Like a game of cat and mouse, vessels frequently reflag, mostly using the same group of little-known African and Pacific country registries, always keeping one step ahead.

Owners of the subterfuge fleet exploit the weakness of these registries, which are often poorly resourced or have management sub-contracted to private companies that can fail to make basic checks for eligibility.

Flag-hopping means even Panama, the world’s largest registry, appears flat-footed and reactive rather than proactive. A total of 26 tankers representing 4.1m dwt on Lloyd’s List’s subterfuge fleet list are currently registered to Panama.

Panama de-flagged the vessel in June 2020 when it was known as the Free Sea. The 73,004 dwt, 2003-built product tanker immediately moved flag to the Cook Islands and was renamed Jag Lara.

By October the tanker had again reflagged, shifting to Djibouti with its latest name, and taking on a third technical shipmanager, Peridot Ship Management in Mumbai, India.

Peridot is also listed as the technical manager of another anonymously-owned, Djibouti-flagged aframax tanker, Saint Nicholas (IMO: 9229362) involved in sanctions trading. Peridot’s website has been suspended and the company could not be located.

This complexity makes tankers harder to track by the sanctions regulators they seek to avoid. Officials within institutions such as the US Treasury’s Office of Foreign Assets Control have little maritime knowledge and complexities of tracking subterfuge shipping practices have proved difficult for several of the institutions seeking to impose sanctions.

As recently as February 3, the US Department of Homeland Security and Federal Bureau of Investigation erroneously identified three flag-hopping tankers in connection with a forfeiture order of nearly 2m barrels of Iranian oil filed in a US court.

The Department of Justice filing mistakenly confused the flag of the suezmax tanker Sarak (IMO: 9226968) as Marshall Islands, one of the world’s largest registries and regarded as one of top five in terms of quality and regulatory standards.

Records show the tanker has been flagged with Iran since January 2019 and is sanctioned by Ofac.

Another Iran-flagged suezmax, Sonia I (IMO: 9357365) — named in the filing as receiving an Iranian cargo — was mistakenly identified with its former flag of Panama.

Adding to confusion the third tanker, Cook Islands-flagged Ethan (IMO: 9293741), was named as Lubov — a previous name with a former (Comoros) flag, which it left in October.

The filing said Ethan engaged in spoofing its location to disguise loading an Iranian cargo in June 2020.

Ethan is one of three very large crude carriers and two product tankers now flagged with the Cook Islands and engaging in patterns and practices of behaviour identified as deceptive and sanctions-busting.

The Cook Islands registry said in an email to Lloyd’s List that it actively enforces compliance, including screening and other investigative methods, to identify any practices that might endanger safety at sea. It was investigating all vessels and would respond once that was completed.

The registry said it was preparing to de-flag Ethan and another VLCC, Laka (IMO: 9203253), unless new certificates are received shortly because Bureau Veritas withdrew class from both ships between late December and early January.

Subsequent checks by Lloyd’s List showed that three of the tankers were not entered into the P&I club that the owners gave to the Cook Islands.

While such gaps in due diligence are seen across many flags, most act to remove tankers if independent evidence is provided and is corroborated. Satellite images for vessels undertaking ship-to-ship transfers of Iranian crude while Automatic Identification System signals are switched off provide the irrefutable proof on which most, but not all, registries act, Lloyd’s List has learned.

Panama, as well as Belize, the Cook Islands, Gabon, St Kitts and Nevis, and Tanzania registries have all purged subterfuge ships, only for them to reappear with other registries.

The latest safe havens appear to be the Cameroon and Djibouti registries, which have welcomed flag-hoppers from Gabon, the Cook Islands and Panama

Lloyd’s List attempted to contact 13 key registries all with ships identified by Lloyd’s List as having engaged in suspicious activities. Three responded: Belize, Panama, and the Cook Islands. All reported they are investigating the tankers named and would get back as soon as they could, acknowledging such checks took time and so would not be completed before publication of this article.

As a result, emails were returned, phone numbers failed, or websites did not work for Cameroon and Djibouti. Vietnam registry’s mailbox was full, a return message said, and the phone number failed to connect.

The remainder of registries approached did not respond after Lloyd’s List reached out using both contact details they supplied to the IMO, as well as any email or telephone contact details from websites if one could be traced. These were Comoros, Palau, Samoa, São Tomé and Príncipe, Sierra Leone, St Kitts and Nevis, Tanzania and Togo.

Two vessels were linked to fraudulent flagging with Samoa, which does not have an international register; Elva (IMO: 9196644) and Dazzle (IMO: 9203277). AIS vessel-tracking shows the VLCC Dazzle is engaged in regular shuttle runs from an Iraqi anchorage, diverting to Iran to load, then sailing to waters off Malaysia for ship-to-ship transfer.

Another two VLCCs are fraudulently registered in São Tomé and Príncipe, which lacks any international register; Ceres 1 (IMO: 9229439) and Judy II (IMO: 9224295). They operate in similar trades, with STS regularly seen taking place off Fujairah, Indonesia and Malaysia.

Lloyd’s List Intelligence data reveals these as the only tankers in Samoa or São Tomé and Príncipe’s fleets, with other ships being fishing or coastal vessels, most with deadweight under 5,000 dwt.

The Samoa and São Tomé and Príncipe registries were approached for comment but had not responded by publication.

Tankers from the subterfuge fleet tracked shipping Iranian or Venezuelan crude at anchor off southeast Malaysia. Tankers frequently wait here for STS transfers to or from another vessel for onward voyage to Asia, usually China. Flag registries of tankers here include Togo, Tanzania, Djibouti, Sao Tome & Principe and Samoa. The latter two do not have international ship registries. This means these vessels have been fraudulently registered, according to the IMO database.

As the largest flag registry, Panama has the most tonnage in the subterfuge shipping fleet. Some other quality open registries have one or two vessels on the list but these relate to Greek-linked ships that have recently changed ownership structures to load Venezuelan cargo. These kinds of voyages and are usually swiftly identified and dealt with, analysis of flag changes shows.

Deceptive or sanction-busting activities should be easy for registries such as Panama to identify. One tanker, Queen 1 (IMO: 8614467), said to be Panama-flagged in two databases, was transmitting its location via AIS at Asaluyeh terminal, Iran, on February 4.

Another, the Panama-flagged VLCC Freya (IMO: 284889) was seized by Indonesian authorities for undertaking an unauthorised STS with a sanctioned National Iranian Tanker Co-owned VLCC, Horse (IMO: 9362061), on January 24.

The registry’s spokesman said in an email that he was checking these and other vessels named by Lloyd’s List but would not be able to respond quickly, explaining that the flag would need some time to fully investigate.